Today we would like to give you a small update on the development of Tobu Tobu Girl Deluxe, showing off some of the changes to the game and talk a bit about some of the new features we are working on.

We are currently running a Kickstarter to collect funding for a Game Boy Color physical release of the game. You can find the Kickstarter campaign here.

We recently wrapped up work on adding Game Boy Color support to the game. Besides colorizing the old assets, we have also remade a lot of the graphics. We felt like many of these changes were necessary because the old graphics didn’t translate well into color. Other assets, such as the main menu banner, were redone to better fit into the overall style of the game.

Here are some comparisons between the original version (left) and the Deluxe version (right):

And here are the new main menu banners: 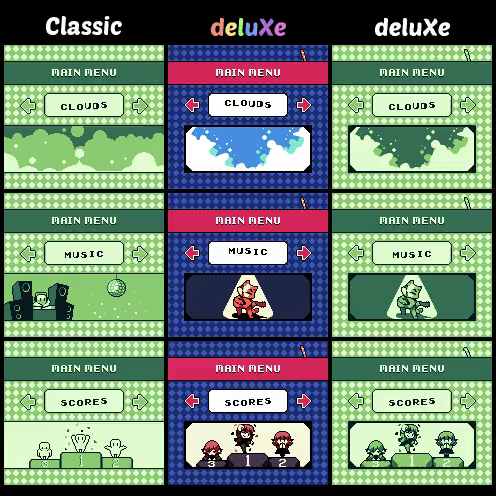 Since we are expecting to hit the Super Game Boy stretch goal on Kickstarter, we have started preliminary work on Super Game Boy border and colorization.

Lukas just finished up this mockup of the Super Game Boy border. Keep in mind this is just a mockup and it may look different in the finished game. We have also started mocking up the SGB palettes. Here are some initial mockups:

Colorization on the Super Game Boy is quite limited compared to what is possible on the Game Boy Color, but we still think these changes make the game look a lot more vibrant.

We have also been pondering the possibility of adding an “infinite” game mode. Due to the arcadey nature of the game it is, in its current state, a rather short one, inviting the player to strive for the coveted S-rank through multiple playthroughs. We would like for this extra game mode to provide a extra challenge for those who have already mastered the game, while also providing a new experience for those who would rather overcome new challenges than to strive for that one perfect score.

Due to the infinite nature of this game mode we want the background images to change as you progress, while adhering to a coherent theme. Following are some mockups of backgrounds. Thank you for reading. We look forward to releasing the final game later this year!

Thanks! Yeah, we certainly won't rule out any of these changes if the goals aren't met. If the stretch goals are met we promise they will be definitely added, if not, it depends a bit more on time/resources and how satisfied we are with initial prototypes.

Yesss this looks amazing. Really digging the graphical changes too!

I know it's probably bad business advice and everything, and I hope you reach the Infinite Mode stretch goal of course, but I also hope you'll consider adding that mode even if you don't make the stretch goal. Perhaps with fewer customized backgrounds/music tracks or something. It'd be such a natural mode for this game.